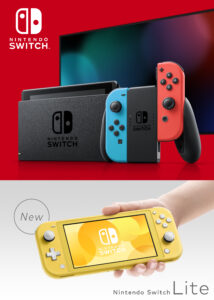 It didn’t take Nostradamus to predict Nintendo would have a very strong week of sales around American Thanksgiving, given that they just released a super popular Pokémon game – Pokémon Sword and Pokémon Shield have sold a combined 3,000,000 units – but I probably wouldn’t have predicted a new all-time record.
It’s a good thing I didn’t put money on that though, as the House that Mario built crushed expectations and turned in its best week of Switch sales in both the U.S. and Canada. In the States alone, the Switch and Switch Lite sold over 830,000 units.
They weren’t done there though, as Cyber Monday also set a new record for Switch sales.
Here’s the press release:

Nintendo Switch Achieves Its Best Week of Sales Ever in the U.S.

REDMOND, Wash., Dec. 4, 2019 – Over Thanksgiving week (Nov. 24 to Nov. 30), the Nintendo Switch and Nintendo Switch Lite systems sold a combined total of more than 830,000 units in the U.S., according to internal data. This ranks as the single best week of U.S. sales in Nintendo Switch history. These results were bolstered in part by the recently introduced Nintendo Switch Lite system and a variety of Black Friday offers, such as a Nintendo Switch bundle that included a full game download of the Mario Kart 8 Deluxe game at no additional charge. Total sales of Nintendo Switch in the Americas have reached 17.5 million units.
Additionally, Cyber Monday broke records as well, becoming the best one yet for Nintendo Switch.
“Holiday shoppers see the value of Nintendo Switch, which offers a vast library of games for every type of player,” said Nick Chavez, Nintendo of America’s Senior Vice President of Sales and Marketing. “Whether shopping for the ideal gift or picking one up for yourself, the Nintendo Switch family of systems provides options that fit every play style.”
In addition to hardware, Nintendo Switch software also sold well over Thanksgiving week. In only a few weeks since launch, the Pokémon Sword and Pokémon Shield games have now sold a combined total of more than 3 million in the Americas. Other Nintendo Switch games also passed new life-to-date sales milestones in the Americas, including Mario Kart 8 Deluxe at 8.5 million, Super Smash Bros. Ultimate at 8 million, Super Mario Odyssey at 6.5 million and New Super Mario Bros. U Deluxe at 1.5 million.*
To see what systems, accessories and games Nintendo has to offer this holiday season, visit https://happyholidays.nintendo.com/.
Remember that Nintendo Switch features parental controls that let adults manage the content their children can access. For more information about other features, visit https://www.nintendo.com/switch/.
*All sales figures from Nintendo internal data.

About Nintendo: The worldwide pioneer in the creation of interactive entertainment, Nintendo Co., Ltd., of Kyoto, Japan, manufactures and markets hardware and software for its Nintendo Switch™ system and the Nintendo 3DS™ family of portable systems. Since 1983, when it launched the Nintendo Entertainment System™, Nintendo has sold more than 4.7 billion video games and more than 750 million hardware units globally, including Nintendo Switch and the Nintendo 3DS family of systems, as well as the Game Boy™, Game Boy Advance, Nintendo DS™ family of systems, Super NES™, Nintendo 64™, Nintendo GameCube™, Wii™ and Wii U™ systems. It has also created industry icons that have become well-known, household names, such as Mario, Donkey Kong, Metroid, Zelda and Pokémon. A wholly owned subsidiary, Nintendo of America Inc., based in Redmond, Wash., serves as headquarters for Nintendo’s operations in the Americas. For more information about Nintendo, please visit the company’s website at https://www.nintendo.com/.

Video Game Studio Rebellion Branching Out Into Board Games